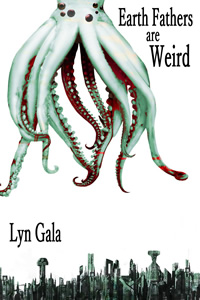 Max is a fighter pilot in the U.S. Air Force, sent to engage alien ships that seems to be invading Earth. His plane takes a hit and the next thing Max knows, he's waking up aboard a space ship full of strange creatures from other worlds. The aliens have no interest in Max and drop him off at a planet used as a trading center far from home. He will need to find a way to pay for the long trip back to Earth, and it seems the highest paying job available is to be the nanny for a tentacled alien's kids. By the time Max figures out how terribly inaccurate the term ‘nanny’ turns out to be, it's too late.

I have a penchant for quirky titles, so “Earth Fathers are Weird” got my attention right away. I don't think I've ever been disappointed by a book I read just because the title was offbeat, and this story is no exception. It's quite fast paced, and so it doesn't take long to get to the meat of the story. We get to know Max along the way, without much preamble, as the tale is told entirely from his point of view. The fact he is gay is about the only slightly out of the ordinary thing about Max. Otherwise, he's just your average military man trying to figure out how to survive in a very strange situation. One that pilot and officer's training didn't prepare him for.

While humor definitely pervades this book, it is really a rather heartwarming offbeat romance between two unlikely characters. Two very unlikely characters. This is probably one of those science or speculative fiction books where it doesn't pay to think too much about the “mechanics” involved, let alone the likelihood. The writing definitely makes it seem plausible once you’re immersed in the story.

Most of the story takes place aboard the ship of Max's employer, whom he has dubbed Rick, since he can't grasp the name in Rick's native language. This makes the world-building quite simple, since for much of the book there's just Max and Rick alone in the confines of the ship. There's still plenty of drama, as first Max figures out the true nature of the work he was hired to do, and then then ship is invaded. This all works well to bring Max and Rick closer together.

The interesting thing about this story is that while there are parallels to it, notably the Alien movies, and the author doesn't shy away from these, even works them into the story, yet this tale still comes off as quite fresh and different from other books with seemingly similar subjects.

“Earth Fathers are Weird” is available from Amazon.