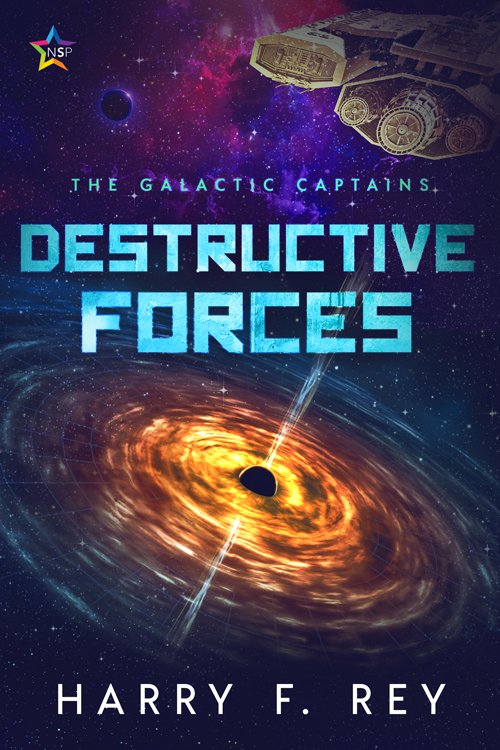 Volume 4 of The Galactic Captains

Ales may be lost in another galaxy after his STAR drive is accidentally triggered, but the spark of revolution his words inspired are winding their way around the worlds of this galaxy. Meanwhile, his mother Sallah, now aware that Ales survived the destruction of Teva, joins with her former lover Sanya to find a way to get Ales back. Time may be against them, with the competing forces seeking control of the Kyleri empire converging on the last operational megacollider.

The many threads of plot lines finally begin to come together in this fourth book of the The Galactic Captains series. It should come as no surprise, and therefore it's not much of spoiler, to learn that the widely dispersed events of the first two books are in fact related.

Ales may be missing, whereabouts unknown, but the rest of the characters are all involved in this installment, which means there's a lot of bouncing back and forth between the various story lines, including one new protagonist, Mahnoor, a farm-boy on the outer edge of the Kyleri empire who dreams of being an imperial pilot and escaping his dull existence on a planet far away from the center of the universe. The Star Wars parallel didn't occur to me while I was reading to book, so it's probably not as obvious as it seems.

In addition to the new character, this book picks up the stories of Antari on Kyleri and the crew of the Daring Huntress. Antari is proving to be a rather interesting character. At first he seemed to be a throw-away designed to get some of the other players in place, but it's looking more and more like he will be a pivotal personality.

Then there's Turo. He seems to be indestructible, like a cockroach. He still plays a minor but pivotal role in this installment, but we also finally get some of his backstory as well as clues as to whether he's really the one pulling the strings or just part of someone else's grand plan to disrupt the galactic balance.

“Destructive Forces” is available from Amazon.