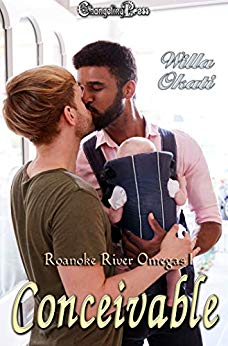 Omega Jory has always been in love with his best friend and Alpha, Darius, so when Jory determines that he wants to have a baby, he can think of nobody he’d rather father it than Darius. The question is, what will that do for their friendship if Darius doesn’t have the same feelings? The truth is, the Alpha does love Jory, although he has never admitted it, and likewise assumes the feelings aren’t returned.

“Conceivable” is a sweet short romance story without any real drama. The main, and really the only, friction in the story is the result of the two men’s inability to communicate their feeling to each other. It’s not much, but in such a short book there’s just enough tension to make a good read without being too abrupt.

The story is related from both character’s point of view, and the bulk of it is just the two men with occasional interludes where Jory or Darius consults with their respective close friends. All of the characters are quite believable and understandable within their world.

A world of male alphas, betas and omegas - the “omegaverse” as it’s often referred to - is quite a common theme these days, so there’s not really any time spent world building. The writing flows well with tight yet evocative descriptions moving the story along at a nice pace. While I appreciated the story-telling and the writing, this book really feels like straight romance barely disguised as a m/m story. Some like it, but it didn’t really appeal to me.

“Conceivable” is available from Amazon.